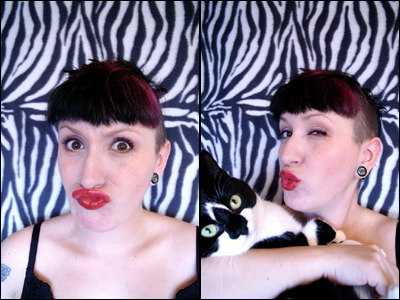 Hey, I see you, as does Piglet!
My mother told me it's common courtesy to introduce yourself, so please do.
Well, actually, my mother didn't, she was too busy downing booze and throwing knives like she was a cowboy and not a mother of 2, but still, it's common courtesy.

(From time to time, there are 'hidden'/friends-only/filtered entries. Even if you're not on the friendslist, feel free to read and comment. Communication = good)

I also blog at schmut.net whenever I find Livejournal too limiting...which has been a lot lately. Don't think I ever made any resolution? Especially knowing I can never keep up or keep my promises when it comes to what I should do or not do with my life. Somebody suggested that we'd make new year's threats this year and it seems more promising; if I DON'T do this, I will sell my arse on Ebay / start listening to Rammstein / start using spraytan as if it was praytan.

In my case, this is running more.
My body is not what it used to be and since I can't have another surgery (don't have the time, the money or the babysitter) for a long time, I need to do something to strenghten and to cope. The latter is the key I guess. You know those marathoners that keep on running even though their ears fell off and their toes are just a bloody mess? I want to be one of those. Not as in running marathons, but as in being able to block out pain.

But as with everything else, there's time-management. When to run, where to run? Daylight is only a few hours this time of year and those hours I usually spend either studying or doing everything that needs to be done while Iggy's away.

At 34, I got my first membership at a gym.
I'm still a bit ambivalent about this as it seems like a manufactured lifestyle where you're not doing something for fun but because you have to or should. But then again, I should and I can't run anymore. And hey, this place has pilates, yoga (even kundalini) and tai chi as well as different dance-routines and boxercise.There must be something I can do without literally breaking my back.

Then there's just the selfconciousness to deal with; not being able to move properly and looking like a robot. I have to try to make it look deliberate I guess. Like it's my thing.

One of the ads on the frontpage of Livejournal were mailorder-brides. Google-ads, aren't they supposed to fit the content of the site? If so, am I looking for a girl to do whatever I tell her while I rip her passport to shreds and treat her like dirt?

Jokes aside, I really despise the ads. I will pay for my journal just to keep them out of my site/sight, but really, I'd pay double to make sure nobody has to see them. If you dont come here often or you're thinking about getting an account - trust me, it gets better when you're logged in. She's attacking him, thinking he's prey and he's wagging his tail all along. No wonder I love my little family, they're awesome.

A couple of months back, just after Christmas, we got ourselves a new cat. Another rescue-kitten. Her mother was a stray that wasn't very social (no wonder) and she died when the kittens were tiny. Some kittens didn't make it but this beauty and her brother did. He did all the eating while she did all the grooming. No wonder he's huge and she's petite.
She's called Vera and she's a wild one. By wild one I don't means Joan Jett-wild but predator-wild. She steals food from the dog, snatches toys off Iggy's desk and think I am her personal pillow.
She's nothing like any other cat I have had which is a good thing. Then it would just seem like I was trying to replace the ones I've loved and lost. I still cry over Big Boss (literally) but I wouldn't want to try and get a cat just like him. That would just be....#fail. It's almost 6 months since my surgery, so we went down to the allotment to do something. I have missed playing around in and with my dirt.  Today we put potatoes and pak choy into the ground as well as went over the seed beds, digging in some compost. Later on, tomatoes, squash, cucumber and some other basics will join in on the fun,

What you see above is not ours, Buddha wouldn't be sitting down for long in ours. Iggy would have removed him, thrown him into a tree or planted him to see if he'd sprout.

Trying to find a good android application that doesn't use imageshack for hosting. Know of any?

Somebody wrote that Facebook as a social network is less social and more work. I think they were spot on. I find myself knowing less about the people I like and more about where they ate last night and where they're geotagging right now.

I miss LJ but all I find when I look at my friendspage is a bunch of twitter- and bloggerfeeds. What's the point of that?  Re-feed the feeder some old shite. Regurgitate for the ne(x)t.

Still waiting for the results from the X-rays.
Still waiting to see a specialist.
Still flat out broke. So broke that I am entering every darn contest/giveaway on every other blog to win something that will make my life a little more glamorous than it is.
Iggy's still the best kid in the world and she's still heavily influenced by Bart Simpson with a touch of Patrick Star. Her dancing always ends up with her mooning the crowd...

How about you guys? Are you mooning the crowd?
I have read a lot of tweets (and statuses) about people returning to good ole Livejournal but I have yet to see you update?
Facebook is only about Farmville (to me) and Twitter, well, it's when I have too much time and nothing much to do. It's not like I am cheating on you guys....

Ps: The whole Jesse James shebang - don't I recognize that girl from some site under a slightly different alias?
Collapse